A Buddhist temple lost a couple decades ago in Thailand has now amazingly revealed itself again due to a recent drought. When it comes to rainfall, it seems there is either too much of it or not enough. Floods bury homes and make them uninhabitable. Droughts make it difficult, if not impossible, for farmers to grow crops that sustain their country, and in some cases, the world. All in all it’s a case of extremes. But sometimes exciting things happen during these otherwise unpleasant events.

An example of this “feast or famine” outlook for water supply happened just recently in Thailand, in the province of Lopburi. Drought reduced water levels dangerously, leaving countless dead fish but unveiling a Buddhist temple, called Wat Nong Bua Yai,  that had been hidden for 20 years. (It last peeked out in 2015, during a previous water shortage.)

It first became submerged two decades ago when a dam was built to help reserve water for the region’s farmers. The village nearby, Nong Bua, no longer exists either; it’s as though the temple and the village were suddenly curtained by a blanket of water. 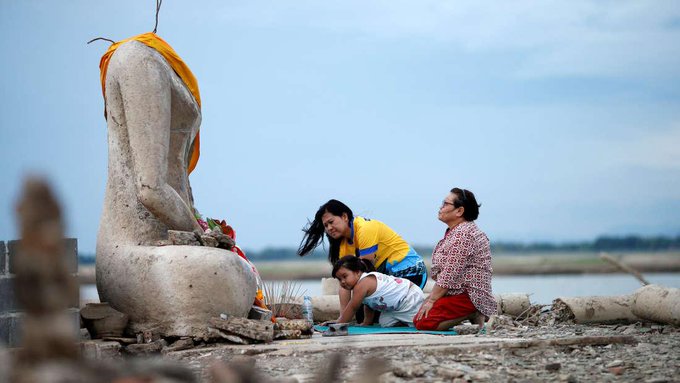 The dam was able to contain 960 million cubic meters of water, and was used to supply well over a million acres with badly needed irrigation. The drought has reduced that to just 3,000 acres; it previously supplied four provinces, but now has only three percent of its usual amount.

Although many visitors walked great distances to visit the statue, some expressed concern about the struggles facing farmers as a result of the shortage. Some recalled visiting the temple as young children, when it was a hub of community activity. Yotin Lopnikorn, who was headman of the village of Nong Bua, told Reuters News that he used to visit the site as a young boy. “When I was young,” he recalled, “I always came to meet friends at the elephant sculptures in front of the main building, to play there.”

Thousands of people have made their way to the site to pay their respects to the headless, 13-foot sculpture of Buddha, including several Buddhist monks. One visitor commented to Reuters, “The temple is normally covered by water. In the rainy season, you don’t see anything.”

According to buddhistdoor, a website dedicated to Buddhist matters, thousands of devoted people are making their way, on a kind of pilgrimage. Some even offered the statue a “fresh set of robes,” the website observed. One farmer interviewed said, “I’ve never seen such a drought in 50 years.” It has cost 10 billion baht in economic losses, about $325,000 USD. “This is supposed to be the rainy season,” the farmer lamented.

A video showing the entire scene of the uncovered temple can be seen below:

Seree Supratid, director of the Climate Change and Disaster Centre at Rangsit University, told the website that, “If it doesn’t rain by (the end of) August and September, there will be worse repercussions, because we won’t have any water supply squared away.” Supratid recited two causes for the drought: climate change, and the nation’s poor management of the water used for agricultural purposes.

The area in which the temple is located is usually used to grow rice, but the paddies lay barren and cracked these days. What was once lush and productive now looks like dry clay. If rain doesn’t fall soon, to restore the region’s dam and nourish the crops, Thailand is in for a difficult time producing a food that is so central to its cuisine, and its exports.